Born Australia’s first Thalidomide child in December 1959, Brett skillfully uses his feet as others use their hands. He has an unstoppable resilience and resourcefulness that inspires him to realise his dreams.

Brett developed a keen interest in music when he was in his teens and taught himself to play piano while attending boarding school.

As well as being a successful composer, recording artist and music producer, Brett is also a motivational speaker, owner of a small record label, music engineer and earthmoving contractor. He built his own recording studio and has helped to raise five children.

From the age of two, Brett became the face of the Thalidomide disaster in Australia and overseas. He starred in Roger Graefs’ award-winning documentary in 1964 entitled, One of them is Brett, and has since appeared in many newspaper, magazine, television and radio interviews.   Roger Graef revisited Brett in February 2015 and has made a new 1 hour film about Bretts’ life some 50 years later. His new film, Brett a Life Without Arms, is scheduled for broadcast on BBC1 in October 2015.

At age 19, Brett moved to Northern NSW where he still lives today. 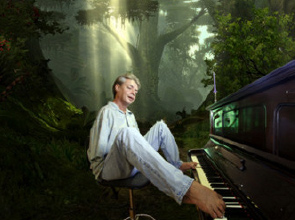